I'll Drink To That Juice Bar 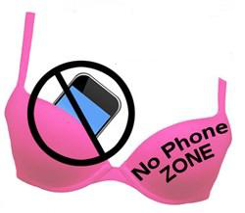 LADIES—Stop Putting the Cell Phone in Your Bra!!!

Cell phones emit an amount radiofrequency energy AKA radio waves, a form of non-ionizing radiation, from their antennas. These waves can heat up the tissues that are close to the phones. Though the data is inconclusive on whether this causes cancer or not, here is what the American Cancer Society had to say about it:
“… the IARC classification means that there could be some cancer risk associated with radiofrequency energy, but the evidence is not strong enough to be considered causal and needs to be investigated further. Individuals who are concerned about radiofrequency energy exposure can limit their exposure, including using an ear piece and limiting cell phone use, particularly among children.”
and in 2011 (no updated info has been found) the WHO’s IARC said – “The Working Group classified cell phone use as “possibly carcinogenic to humans,” based on limited evidence from human studies, limited evidence from studies of radiofrequency energy and cancer in rodents, and inconsistent evidence from mechanistic studies.
In 2009, a study was done for men who wear their phones attached to their belts (in a case) and the results showed bone mineral density of their pelvic bone had decreased on the side that they carried their phone on.
Still wanna take a chance your precious body? What happens to our tissues when they are heated? Remember your biology and anatomy classes? We do. We’ll fill you in on the next blog.

About the author: admin

No other information about this author.